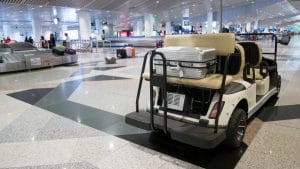 There are about 40 airports and airfields in Alabama, though many of them are small and privately owned. Huntsville International Airport and Birmingham-Shuttlesworth International Airport, however, serve millions of people every year, flying hundreds of aircrafts each day. With the holidays season fast approaching, there is a good chance that you may find yourself in one of these airports soon, waiting for a flight alongside thousands of other people.

When you think about air travel injuries, it’s natural to think first of a plane crash, or a piece of luggage falling out of an overhead bin during turbulence – but planes aren’t the only dangerous places. When you have so many people in one place, and so many moving parts, the risk of an injury increases.

For example, airport golf carts are so quiet and move so quickly that unless you visibly see them coming towards you, you may not be able to dodge them, and they can do some serious damage. A child’s head was nearly crushed by one, and left him with drag burns.

Travelators, better known as moving walkways, are another great invention, but they can be a real hazard. Because there is no good way to ease onto the moving platform, people with poor balance can be quickly swept away, and may fall. You also have the added danger of children being very attracted to them as “rides,” too.

You may have also been injured (or come close to it) somewhere in between trying to park your car and boarding your plane. If you were hurt in a long- or short-term parking lot, while on a shuttle bus, or by another passenger trying to get on a plane, the airport may be liable for at least your costs and losses.

Most frequent fliers tend to know where the potential dangers are, but what about unforeseen injuries? Sometimes, it is our fellow travelers who put us at risk. Long layovers and canceled or delayed flights just come with the territory of air travel. Bored, hungry, and frustrated passengers often choose to seek refuge in one of the many airport restaurants and bars to kill time. Intoxication combined with the stress of being temporarily stranded can make for volatile situations, putting unknowing bystanders in danger. A drunk passenger who takes a swing at you may be liable if he or she hurts you, but so might the bartender or airport.

Major airports have become more than just places to catch a flight. They are social environments putting thousands of people together in sometimes risky situations. If you have suffered an airport injury due to negligence, contact Martin & Helms. Our Huntsville injury lawyers help clients Decatur, Athens, Madison, and throughout North Alabama. To learn more, or to schedule a free consultation, please call 256-539-1990, or fill out our contact form.