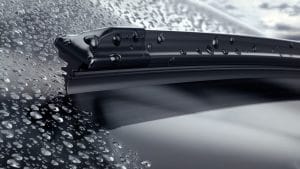 Windshield wipers are one of the cheapest parts on any vehicle but they’re also one of the most ignored when they begin to go bad or malfunction. They don’t play into the actual operation of your vehicle on a regular basis so they’re easy to overlook and forget about until you need them again. Drivers may ignore the problem and put off the task of replacing failing wipers because it’s an inconvenience.

Drivers don’t think about the fact that just like seat belts you’re supposed to wear each time you get behind the wheel, windshield wipers are also a safety feature intended to protect you and others from harm. Without properly working wiper blades you risk causing a car accident or being unable to avoid one because you can’t see to react.

What causes wipers to go bad?

There are a number of factors that can play into causing the demise of your windshield wipers and how to know when you have a dangerous problem.

Aging. Windshield wipers are really only designed to last 6-12 months but most of us only replace them when we take a car in for servicing and the service tech mentions it. Even then, many of us are likely guilty of saying we’ll just do it next time. Next time can turn into years for some people who don’t drive that often. After too long, the rubber becomes cracked or hard preventing them from sealing against the glass to smoothly clean it.

Wear and tear. Dirt, dust, ice, pebbles, and debris flying up from the roadway or being washed over your car when it rains can all become stuck to your windshield or trapped under the wiper blades. When you use your windshield wipers, all of this grime becomes lodged between the glass and rubber and can damage the blades.

Defective blades. If wiper blades aren’t formed properly when being made, it can cause them to be ineffective at their job. When something goes wrong in the production process, such as using bad rubber or blade arms not contouring properly to the blade, it can end in your wiper blades putting you at risk. If this causes you to have an accident where you or someone else is injured, you could have a product liability claim.

Signs that you need to replace your wiper blades can include:

Even though it seems like such a small, insignificant part on your vehicle, damaged or worn out wiper blades can be very costly when they play a role in injuring someone in a car wreck.

Driving in bad weather with broken wipers. Some occupations require a lot of driving through many states and types of inclement weather depending on the time of year. Not having a clear view of other vehicles or road obstructions around you can end in catastrophe. Truck accidents increase in bad weather, often due to lack of visibility. Alabama sees rain approximately one-third of the year, making windshield wipers a regular safety necessity for every driver in the state to avoid vehicle crashes. At night, this is particularly dangerous because drivers also have to contend with the glare of headlights reflecting off the water on windshields, which causes a blinding effect.

Recalled windshield wipers. Wiper blades have been recalled by several companies recently, including Volvo, Fiat Chrysler, Jeep and Ram all have had issues requiring a remedy to ensure owner safety in 2020.   The recalls were all to deal with the same loose nut on the wiper arm, which can cause the wipers to fail.

In general, types of defects that could create product liability include a:

If you or a loved one has been involved in a motor vehicle accident due to a defective part or negligent maintenance, it is imperative that you hire an experienced legal team to protect you from the risks that arise while handling an injury claim.

Schedule your free consultation with one of the knowledgeable car accident attorneys at Martin & Helms in our Huntsville or Decatur office today by calling 256.539-1900 or by reaching out to us through our contact form to briefly tell us your story. We protect clients who have been injured in North Alabama including Huntsville, Decatur, Athens, and Madison. Cases are handled on a contingency fee basis so there is no cost to you unless we win your case.