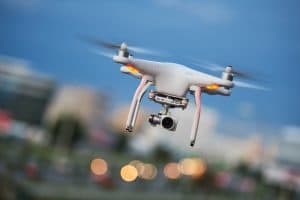 Drones have become a popular gift for people of all ages. They come in various shapes and sizes and have some interesting features. Drones can be used by anyone who follows the FAA flight rules and receives the proper certifications to fly them. These devices are now being used by emergency services departments across the country to record training sessions, search for victims lost in the woods, assist with water rescues, find hotspots at large fire scenes, and help with accident reconstruction.

The old way to reconstruct an accident scene

If you’ve ever been stuck in standstill traffic in Huntsville because of a serious motor vehicle accident, it could be due to an accident reconstruction and investigation. The old way of reconstructing an accident scene would keep roads closed for anywhere from four to eight hours, snarling traffic and causing serious congestion problems on secondary roads and throughout neighborhoods.

Before the advent of the drone, law enforcement officials would have to reconstruct an accident scene immediately following the crash:

Even with the addition of lasers and cameras, accident investigations can last anywhere from two to four hours, depending on the complexity and severity of the crash.

The safety benefits of using a drone for accident reconstruction

First responders have four priorities that must be taken into account at each accident scene:

There is a contradiction with the third and fourth items on the list, as first responders can’t work too quickly when documenting and securing evidence of an accident scene or else it could compromise the evidence. At the same time, first responders want to spend as little time as possible on the street with traffic driving past them, while also preventing secondary accidents.

The most dangerous time to be on the road is immediately after a crash. The likelihood of a secondary accident occurring is higher because of debris in the road, a sudden stop in traffic, or other motorists slowing down to gawk at the accident. Purdue University research reports that secondary accidents increase by 24 times immediately following an initial accident.

“The likelihood of a secondary crash increases by 3% for every minute the primary incident is ongoing,” according to Andrew Klane of the Massachusetts State Troopers. “Traffic crashes and struck-by-incidents continue to be one of the leading causes of on-duty injuries and deaths for law enforcement, firefighters, and towing and recovery personnel.”

While improving the safety of first responders, drone usage at accident scenes also helps reopen the roads at a quicker pace compared to previous investigation methods. Reopening the lanes of travel quicker helps clear traffic and reduces the chances of secondary accidents.

Legal benefits of drone usage for reconstructing an accident scene

There are legal benefits of using a drone for the reconstruction of an accident scene. One such benefit is that the data collected by a drone can be used as evidence in a trial. If your accident case goes to court, our personal injury attorneys can present the data collected by the drone as evidence proving your injuries were caused by the accident.

The biggest benefit of drone data for a trial is that the data can be converted to a digital presentation of the accident. A 3D crash simulation can be created from the data collected by the drone and then played for the jury at the trial. A 3D representation can make all the difference for a jury in deciding whether or not your injuries are eligible for compensation from the at-fault parties.

A drone also allows investigators, from police departments to law firms to consultants, the ability to reconstruct an accident scene long after the scene has been cleared by first responders. For example, if more data from the scene needs to be collected months after the crash, a drone can be flown over the scene to collect this data since roads cannot be closed just for the sake of doing so.

Greg Gravesen is a traffic reconstruction specialist who uses drones to collect data and map scenes. Gravesen said the following in an interview with senseFly:

Interestingly, rotary systems are becoming common, but some people think that fixed wing UAS have no place in forensics. I disagree completely. Often times, especially from the standpoint as a private consultant, my involvement is long after the date of the crash and I don’t have the luxury of shutting down a road. A product like the eBee excels here because I am able to capture highly accurate information about the scene both quickly and safely. I am able to obtain 3D data in a fraction of the time it takes with other terrestrial surveying instruments. And best of all, I do not have to enter the roadway or shoulders to obtain it.

Did you suffer an injury in a North Alabama car accident? The experienced team of Huntsville personal injury attorneys at Martin & Helms can investigate the crash and help you recover compensation. Call us at 256-539-1990, or complete our contact form to schedule a consultation today. We have offices in Huntsville and Decatur and serve clients in Madison, Athens, and throughout the Tennessee Valley.