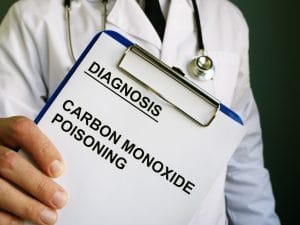 Far too few people are familiar enough with the dangers that carbon monoxide can cause for their families. Carbon monoxide is an odorless, colorless gas that has the potential to cause sudden illness and death based on how much of the gas is consumed. A person who has consumed large amounts of carbon monoxide is at risk of suffering from severe health consequences such as permanent brain damage, loss of consciousness and even death.

With the winter finally here, we all must be aware of the risks of carbon monoxide poisoning. Alabama may not get the bitter cold that other stats get, but storm season often comes with power losses, and that means increased generator use across the state.

How does carbon monoxide poisoning happen?

Carbon monoxide poisoning happens when significant amounts of carbon monoxide build up in a person’s bloodstream. CO can block your red blood cells from carrying oxygen throughout the body, which can lead to tissue necrosis, irreversible brain damage, or even death.

Burning objects like wood, gasoline, propane, charcoal, or any other source of fuel helps to produce carbon monoxide. Burning these types of objects in an improperly ventilated appliance or a tightly enclosed space allows carbon monoxide to build up to dangerous levels.

What are some of the symptoms of carbon monoxide poisoning?

How do generators contribute to carbon monoxide poisoning?

What are some of the health effects of carbon monoxide poisoning?

According to the Centers for Disease Control and Prevention (CDC), approximately 50,000 people in the United States visit the emergency department each year because of carbon monoxide poisoning. Prolonged exposure to carbon monoxide can also lead to memory problems, difficulties with concentration, vision loss, and hearing loss.

Depending on the length of the exposure and the degree of the exposure, people suffering from carbon monoxide poisoning can experience permanent brain damage, damage to the heart, fetal death or miscarriages for pregnant women, and ultimately death.

How can you prevent carbon monoxide poisoning?

One action that your can take is installing carbon monoxide detectors in the house. Homeowners are advised to place at least one detector near the sleeping area in the hallway. When you or a family member hears the alarm, everyone is advised to leave the house and call 911 or the fire department.

Vehicle owners are also advised to open the garage door before starting their cars. you should should never leave the car running in the garage and should be particularly cautious if the home has an attached garage. It is never safe to leave a car running in a space attached to the rest of the house.

Another action that people can take is limiting how fuel-burning appliances are used in the household. Gas stoves or ovens should not be used to heat a home. If you cook on a portable gas camp stove, it should be used outdoors only.

Other appliances such as space heaters and generators should only be used when someone is awake to monitor them. If you must run a generator throughout the night, make sure it is put outside and far away from any windows or doors, so that the carbon monoxide cannot leak into the home.

Carbon monoxide is a quiet, deadly killer. If you or a loved one suffered injury because of CO poisoning caused by a defective product, the experienced Huntsville personal injury lawyers at Martin & Helms are here to fight for fair compensation for you. Please call 256-539-1990 or complete our contact form to schedule a free consultation at one of our offices in Huntsville or Decatur. We also serve injured clients in Madison, Athens, and throughout North Alabama.