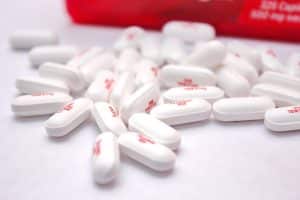 Discomfort and pain are common problems pregnant women experience, with many using Tylenol (acetaminophen) for relief. Any infections, fevers, and colds pregnant women deal with can also call for Tylenol usage. However, a study by the Penn College of Medicine indicates the OTC drug’s usage during pregnancy negatively impacts the fetus.

While research on the link between health issues in children and Tylenol use during pregnancy is ongoing, the Penn College of Medicine study suggests that the children of women who took the drug frequently while pregnant are at greater risk of developmental health problems, including sleep disorders.

What does the Penn study say about Tylenol use during pregnancy?

Penn researchers worked with over 2,400 women who were in the third trimesters of their first pregnancies. They tracked these participants’ health from their third trimester and throughout the next three years. The women discussed their stress levels and Tylenol usage with the researchers, with 41.7% of the participants noting they took the OTC medication while pregnant.

Researchers interviewed the participants one month after their babies were born, then again at six, 12, 18, 24, 30, and 36 months after the births. The women were asked to rate their children’s neurodevelopmental and behavioral prowess via answers such as “not true,” “sometimes true,” and “very often true.” Questions revolved around whether the children could sit still or appeared restless frequently, how often they slept alone, and if they looked at their parents or anyone else in the eyes.

Participants used a three-point scale to rate their children’s development. The researchers wanted to know if the children scored highly regarding issues like aggressive behavior, anxiety and depression, emotional reactiveness, social withdrawal, and sleep problems.

What is the link between Tylenol and sleep and attention deficit issues?

Women who took Tylenol prior to their pregnancies were more likely to experience depression and anxiety before becoming pregnant. Their pregnancies were “high-stress” as a result, so researchers accounted for these factors during their analyses. Those who took the OTC medication while pregnant were more likely to have children with attention and sleep problems compared to women who did not use Tylenol during pregnancy.

Of the women who used the medication during pregnancy, 22.7% and 32.9% described their children as having sleep and attention issues, respectively. Only 18.9% of women who did not take Tylenol while pregnant noted sleep problems, while 28% of this same group said their children experienced attention challenges. The results of the study support previous research signaling the same type of health issues in children, including those linking Tylenol usage with Attention Deficit Hyperactive Disorder (ADHD) and Autism Spectrum Disorder (ASD).

“The fact that neurological dysfunction underlies both sleep and attentional issues in children suggests that an important mechanism of influence may be the impact of acetaminophen on prenatal neurology, which may impact the regulation of attention and sleep in the preschool period,” the study authors wrote, adding that “acetaminophen has been found to be associated with reduced brain connectivity of the amygdala, a part of the brain responsible for self-regulation.”

An increasing number of Tylenol-related lawsuits have been filed

Walgreens, CVS, and manufacturers of acetaminophen-based drugs are facing Tylenol-related legal action. On June 17, 2022, numerous plaintiffs filed a motion with the U.S. Judicial Panel on Multidistrict Litigation (JPML) regarding this issue. Instead of filing individual lawsuits, the MDL, or multidistrict litigation, allowed the plaintiffs to bring their claims before a federal judge. At this time, there are at least 19 Tylenol-related ADHD and autism filings with the U.S. District courts throughout the country.

The lawsuits state that information about the link between Tylenol use during pregnancy and neurological and behavioral problems in children has not been disclosed to the public. If such information was public, pregnant women could find alternative pain relief options that would not hurt the fetuses, such as acupuncture, prenatal yoga, and obstetrician-approved herbal supplements

If you believe your child has Tylenol-related health issues, seek legal counsel now

Realizing there may be a link between Tylenol use during pregnancy and your child’s neurological and behavioral development is naturally distressing. To determine what your options are during this trying time, speak with an attorney as soon as possible. You might be able to join the growing MDL regarding this important issue or file your own personal injury lawsuit to secure compensation that helps you manage your child’s behavioral and or neurological health issues. By working with an experienced attorney, you will mitigate related stress and ensure your claim is submitted correctly and on time.

The team at Martin & Helms in Huntsville, AL, is here to help you navigate all Tylenol-related legal action. This law firm also has a location in Decatur and provides Athens, Madison, and the rest of North Alabama with dedicated counsel and representation. We also provide representation for other OTC-related birth complications, including those due to NyQuil®/DayQuil®, Generic Paracetamol, Alka-Seltzer Plus®, Mucinex, and Excedrin. Whether your child has injuries related to Tylenol or any other dangerous medication, you deserve legal representation from an experienced team. Call our office or complete our contact form today to get started on your case.