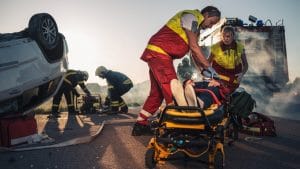 Head-on collisions are among the most-deadly (though least common) of all car accidents, accounting for about 2% of all crashes, but 10% of all fatal accidents.

The reason head-on car accidents are often fatal is a matter of physics: When two cars collide, they both release energy. That energy has to go somewhere, and so cars are designed to absorb as much of that energy as possible, which is why they crumple up. But in a head-on collision, especially at high speeds, the energy cannot be fully absorbed by the vehicle, which means some of it may affect the driver and passenger. Add in the risk of shattering glass (which can blow out when a car is hit at high speeds), and the snapping back of the head, neck, and shoulders because of the seatbelt and/or airbags, and you have a recipe for life-threatening injuries.

Other contributing factors that can result in a head-on crash include:

When cars crash head-on at any significant speeds, the drivers and occupants of both vehicles are likely to die. Survivors often suffer catastrophic and crushing injuries such as:

Survivors have the right to file their own personal injury claim against the driver and any other responsible parties. The families of anyone who was killed in a head-on collision have the right to file a wrongful death case. Unlike other states which allow damages for lost income and the loss and companionship of the loved one, Alabama wrongful death damages are awarded based on the concept of punitive damages. The purpose of the Alabama wrongful death claim is to punish the driver and any other responsible parties such as the owner of the vehicle driven by the careless driver.

At Martin & Helms, our Huntsville car accident lawyers understand how devastating it is to lose a loved one for any reason. We understand how hard it is to resume life after any serious injury. Our lawyers aggressively work to investigate the cause of the crash and to show the conduct by the defendants was wanton, reckless, and inexcusable. To discuss any death or injury claim, call our experienced trial lawyers at 256-539-1990 or use our contact form. to schedule a consultation. We file personal injury and wrongful death claims across North Alabama including Huntsville, Decatur, Athens, and Madison.