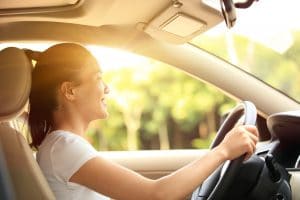 The Insurance Institute for Highway Safety (IIHS) recently released a study finding that women are at higher risk for injury than men in car crashes of the same severity. The IIHS points out that these findings are of note – not because of the physiological differences between women and men, but because of other variables, like the differences in the vehicles men and women drive, and the types of crashes in which they are involved.

Safety advocates have long pointed to crash test dummies and the lack of female bodies as a factor in the effectiveness in car safety design. Consumer Reports said in 2019, “An average adult female crash test dummy simply does not exist, despite the fact that women obviously drive to work, take road trips, and ride in cars with friends, and even though female bodies react differently from male bodies in crashes. That absence has set the course for four decades’ worth of car safety design, with deadly consequences.”

Now, the IIHS report shows that women’s heightened risk of injury in car crashes can also be due to the type of car they drive and the type of car accident they experience.

About the IIHS study and its findings

The IIHS study, released in early February, analyzed data between 1998 and 2015 regarding injuries to both men and women from front and side tow-away crashes and collisions. The data revealed the following:

Researchers expected these results to be mostly due to the physical differences between men and women. However, what they actually found was that women’s increased risk of death and injury was more due to differences in driving behaviors and vehicle choices. For example:

Study author Jessica Jermakian noted, “The numbers indicate that women more often drive smaller, lighter cars and that they’re more likely than men to be driving the struck vehicle in side-impact and front-into-rear crashes. Once you account for that, the difference in the odds of most injuries narrows dramatically.”

“The good news is that changes like strengthening the occupant compartment and improving seat belts and airbags have helped protect both men and women,” she continued. “Homing in on the risk disparities that still exist in compatible crashes gives us a great opportunity to make further gains.”

You can help lessen your risk of injury on the road by ensuring you drive the safest vehicle possible. The IIHS offers a list of vehicles with the best safety ratings for crashworthiness and crash avoidance.

If you or a loved one were injured in a car crash that was not your fault, talk to the personal injury attorneys at Martin & Helms. We can protect your right to compensation for your injuries and losses. To schedule a consultation in our Huntsville or Decatur office call 256-539-1990 or we invite you to reach out to us through our contact form. Cases are handled on a contingency fee basis so there is no cost to you unless we win your case. We also serve injured clients in Decatur, Athens and Madison, and throughout the Tennessee Valley region and North Alabama.